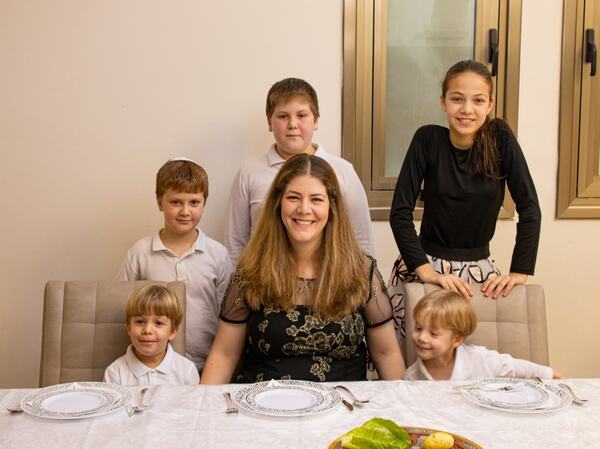 Some terrorist attacks are so savage and inhumane that they defy description, The Halamish Massacure, claimed the lives of three members of the Salomon Family; Yosef (70), Haya (46), and Elad (36). Two and a half years ago, you answered Jacob Katz’s, call to action to help the Salomon Family. We wanted to share with you how Michal is doing today.

On July 21, 2017, Michal Salomon and her husband Elad, made a silent promise to one another. “On Friday night we signed an unwritten agreement. You saw me run upstairs with the children to protect them and you fought the terrorist, so he wouldn’t harm us.” Since then, Michal has stood by her promise to her late husband, and has protected and raised their children in the way that he would have wanted.

After the tragedy, Michal understood that even though different life continues. She sees her and her five children’s lives as a second chance that they were given.  Michal is raising her children by the motto that “Life is beautiful and needs to be celebrated.” The past few years have not been easy for Michal Salomon and her family, but they continue to live life to the fullest.

Michal recently shared with us that before the horrific attack, her and Elad discussed relocating from their home in Elad. They had not finalized a place before Elad z”l was murdered. Recently, Michal decided that there was no better place to raise her five children, other than surrounded by family and loved one. The family moved to Rechovot, Michal’s home town. Michal expressed how well the kids have adjusted and how moving close to her family, has helped her become stronger as a woman and as a mother.

Many describe Michal as a source of strength not only for her family and friends, but for other widows.  “She always has a smile on her face, she is filled with warmth and empathy for others.” She has helped other women in her position see the beautiful aspects of life said a Nava, a OneFamily coordinator. She has taken her situation and status and has become an inspiration to many. Showing many women that even though difficult, it can be done. She picked herself up off the ground, went back to work and has been raising five happy and healthy children.

OneFamily staff has been a constant in Michal’s life since the attack. Michal and the children have been a part of OneFamily activities throughout the years. Last summer, they joined OneFamily on the annual Widows retreat, allowing her to connect with others who have gone through similar experiences. They participated in the recording of our music video with Hanan Ben Arie “World Champion”. The Salomon children are also members of the Youth Division. Reut Salomon recieves a Big Sister from our Big Sister/ Big Borther Program. . Reut was recently featured in a YNET article on the program. She shared how she missed her father, but how the “Big Sister” connection has helped her deal with his absence.

Michal and her five children at OneFamily’s recording of “World Champion” with Hanan Ben Arie.

Even though, Elad’s absence is felt “every hour, second, and day”, Michal has managed to rebuild their lives and has given them a sense of normalcy.  This past December, her eldest son Yotam turned 13. Michal and the rest of the Salomon / Landou family made sure that Yotam celebrated just as Elad would have wanted surrounded by loved ones.

Michal tries to keep herself and the kids out of the media. She is very thankful and appreciative for all your help. Even though, her life isn’t what she thought it would be. She wants you to know that there is a lot of love, laughter and life in their house.  As she said “My Family and I chose Life.”

Thank you for being our partner and helping us in our mission.